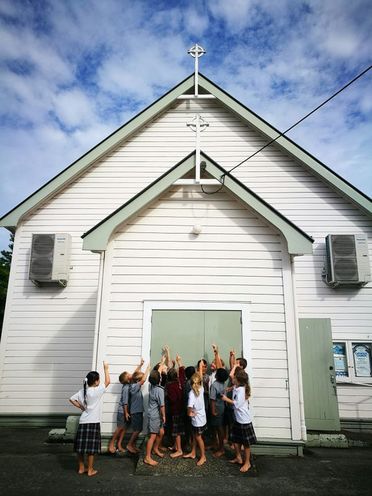 St George’s Parish was placed in Te Kuiti to be a place of worship for all Catholics in the district in the early years of the twentieth century.

In 1909 a parish had been established in Te Awamutu which included Te Kuiti.

In  1915  Te Kuiti  became a separate  parish  which  included  Otorohanga (until January 1946)  and  Piopio. The Mill Hill Fathers from Holland, Ireland and England were placed in Aria and surrounding areas until Diocesan clergy were available. Now the parish is included in the wider Te Awamutu Parish once again.

The  parish  lacked a  school  building for  the first  few  months  but the first  60  pupils were  enrolled  and  classes  were  held  in the  Church.  The school basement where the Sisters made cocoa for the children on frosty mornings was, and still is, the parish hall.

This continued for many years. There has been recent upgrading of the Church and grounds including lovely stained glass windows, organised by Fr Eamon Kennedy, which have replaced the boarded Sanctuary windows.

St Joseph’s School works closely with the Parish and both enjoy benefits from each other.

Parishioners attend school functions and talk with the children.