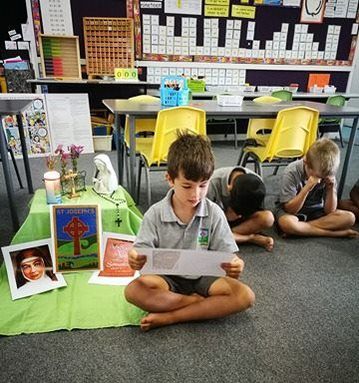 The first foundation of the Sisters of St Joseph was founded in 1866 at Penola, South Australia by Father Julian E. Tenison Woods and Mary Mackillop.  In 1883, this foundation responded to the further challenge of evangelisation to the needs of another country, New Zealand.

St Joseph’s School in Temuka, South Canterbury opened on Monday 12 November 1883. Father Louis Fauvel S.M. of Temuka, met with Father Julian E Tenison Woods, whilst at Villa Maria in Sydney. He heard accounts of what the early members of the foundation were accomplishing in South Australia. Between 1884 and 1921 various convents and schools had been established all over New Zealand with a convent and school opening in Te Awamutu on 19 June 1921.

The accounts of Mary Mackillop’s visits to New Zealand on four different occasions tell the tale of her deeply spiritual, practical and warmhearted personality. As the foundations followed one another a pattern emerged recognisable as a typically Josephite story: First the need, then the call for assistance, the response in service and the sequence of events in growth and development of that service.

One month after the opening of St Joseph’s School in Te Awamutu, another foundation was made in Te Kuiti, the third Josephite foundation along the main trunk line.

Father O’Flynn wrote to to Sister Laurencia Provincial in 1920. Sister Laurencia mentioned the matter in a letter to Mother General, dated 27 January 1921. The plans were out for the school in Te Kuiti. The end of June were to bring Father O’Flynn the community for which he had asked.
The parish was too poor to provide a new convent with the result that Father O’Flynn vacated his presbytery and moved into a rented house. The school was not ready when the Sisters arrived. Sixty pupils were enrolled and temporary accommodation for classes was provided in the church. Almost half the number of first pupils were non-Catholics but this proportion changed as more Catholic students enrolled. The new school, which was blessed and opened on 04 September 1921, comprised of only two classrooms but the corridor was quickly converted into a classroom for the third Sister. In 1928 some of the students came from as far away as Mangapehi, a milling settlement south of Te Kuiti, enduring a long, cold trip in weathered trains to attend the Catholic school.

The buildings were erected on low-lying ground which needed drainage. This was expensive. The teachers’ and students’ enthusiasm more than compensated for the limitations of the ground. Soon an excellent standard in sport was reached. A basketball court was laid down eventually and the Church was moved closer to the street.

In 1935 Father Michael Shore was the Parish Priest and it was decided to build a presbytery on the site of the basketball court. Dwyer Brothers of Puketutu undertook the mammoth task of levelling a section for a new playing area. Eventually tennis / basketball courts were levelled, sealed and surrounded by grassed areas.

Father Peter Sheerin was the parish priest in 1959 and this year the whole school was remodelled and modernised.  Despite the inconvenience for the teachers, the children enjoyed the daily commuting down Queen Street to a Railway Hall at the end of the town. A good lady parishioner saw to it that the Sisters had some hot refreshment at midday. Father Sheerin also undertook to improve the convent.

Te Kuiti has come a long way from the time when Sister Alphonsus Mary sold bunches of violets to help make ends meet. The poverty experienced by the Sisters was all part of the mission, but they never lacked the support of the Te Kuiti people.
A lay principal was appointed in November 1978 and at the end of 1979, due to a shortage of personnel, the Sisters, regretfully withdrew from Te Kuiti. The school roll at the time was one hundred and ten students.